Occasionally I have been asked to explain how I got started in publishing. This piece was originally delivered at Harbourfront, at a celebration organized by Greg Gatenby on the occasion of the 25th anniversary (1999) of the Porcupine’s Quill.

The beginning of my career in publishing was checkered. I applied for an entry-level position at the Coach House Press in the alley off Huron Street behind the storied Rochdale College, for the first time, in 1969.

It was lunch-break at the Press when I arrived, cap in hand, a bothersome urgency in my lower intestine. I remember a strange sort of a purple hue to the air in the refectory. Lunch was done. The press was smoking.

This was 1969, remember. Janis Joplin had just recently parted ways with Big Brother and the Holding Company. Jimi Hendrix had not yet completed his remarkable re-arrangement of the American national anthem — for solo Fender Stratocaster and one overburdened amplifier. Stan Bevington declined my application on the grounds that I was too young, and advised that I return to my studies at University College.

I did that, reluctantly. But I got myself transferred out of a four-year honours English programme to a less rigorous three-year BA when it became clear that I was never to be an academic. I did qualify, however, as a suitable candidate for the one-night Coach House seminar on the operation of an A B Dick duplicator.

Stan Bevington lectured about off and on, water and ink and a few niceties of paper handling that divided evenly into issues about feeding, and about delivery.

In 1971 I began my career in publishing proper, volunteering for the very famous David Godfrey’s fledgling Press Porcepic. Six seventy one Spadina was on the east side, half a block south of Bloor and immediately adjacent to the ‘Wing-On’ funeral parlour. Godfrey had founded the House of Anansi four years earlier in the basement, then moved Anansi up to the ground floor when he subsequently started New Press in the same basement.

Already by 1971 New Press had relocated to upscale quarters on Sussex Avenue. My first job in publishing was to clear the furnance room at 671 Spadina — at one time Doug Fetherling’s bedroom in the late sixties when Fetherling was on the run from childhood and Wheeling, West Virginia — of the several months’ worth of cat dirt accumulated since Fetherling had decamped.

It might have been the second day, or the third, there was a knock at the ground-level trap door to what had been, decades earlier, a colliery. I answered the knock, and looked up to daylight through the yawning cavity.

A noted poet of the day inquired if Fetherling still lived in the furnace, and I assured him that Fetherling did not. Then Michael Ondaatje asked what it was that I thought I was doing ‘down there’?

Ondaatje went home to write The Collected Works of Billy the Kid and I commenced paste-up of the inaugural issue of Porcepic magazine. Coach House was to print the cover on the Heidelberg in return for which I was to be permitted to print the guts of the magazine myself, after hours, on the A B Dick.

The off and the on functions of the A B Dick machine were clear to me, the relation of water to ink, less so, but the niceties of paper handling were sufficiently challenging that I failed to hear a knock at the door of the Coach House later that same night. Some time later still the knocking ceased, and shortly thereafter I was startled to recognize a pair of legs encased in white cotton Nehru pants descending from a hitherto unnoticed gaping hole in the ceiling directly above the A B Dick. Jon Karsemeyer was a friend from English class who subsequently undertook a pilgrimage to India and eventually returned to Canada a committed Quaker. My wife of not so many months, Elke, followed Karsemeyer feet first down through the hole in the ceiling — ‘to see how it was going, with the printing.’ 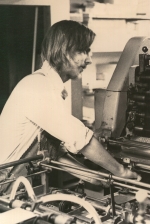 Four years later it had become evident that I was more interested in book production than Dave Godfrey would ever be inclined to invest in antiquated printing machinery. I applied at the Coach House Press a second time, but already by 1974 I was deemed too old to be suitable. I applied, alternatively, to the design department at McClelland & Stewart, and was treated to a generous interview over dinner with David Shaw.

On the way back to Erin Village later that same night I missed a sharp bend in the road until the very latest possible second.

I flung the steering wheel hard left which set the Volkswagen on a course for the opposite ditch, overcorrected to the right and then back again to the left which set the Bug proceeding at considerable speed in the right direction but with the car at right angles to the roadway. The back wheel on the passenger side struck a wayside rock broadside and flipped the car into the air. My shoulder buckled the far door at the bottom of the second overhead barrel-roll and I remember thinking, as I landed on my back, heavily, on the forest floor and watched the Bug pass overhead, that I had likely just destroyed my only means of transport should McClelland & Stewart decide to offer me a position.

McClelland & Stewart did not.

This was the end of the beginning of my career in publishing.

This entry was posted in Tim’s blogs. Bookmark the permalink.