On Friday I left Kingston for my hometown in order to attend the Toronto Small Press Book Fair with Tim. After waking up at 5:30 and scarfing down some cereal, I headed over to The Porcupine’s Quill in Erin and, with a bright-eyed, bushy-tailed Elke waving goodbye, Tim and I drove to the Gladstone Hotel for the fair.

The day started slowly: for a university student, being awake so early is akin to witnessing a family tragedy and I was, to say the least, pretty incoherent. But over the course of our two hour drive to Toronto, the conversation gradually warmed up and ranged from e-books and the upcoming Apple tablet, to different publishing programs in Ontario, to our own previous and dramatic experiences in Parkdale, Toronto, which is where the Gladstone is located. My experience featured a house party on New Year’s Eve and a fiercely wielded kitchen knife. Tim’s were worse.

Toronto was free of snow and apart from one little incident where I spilled all of our boxes across the sidewalk, we set up our booth without a hitch. The Gladstone was crowded, but pleasantly so; the close quarters meant that I could talk to people from other presses without moving from my place behind PQL — without moving at all, actually, since if I did I risked toppling over the chairs and jackets that sprawled behind the booths.

Soon after Tim and I set up, Don McLeod, editor of The Devil’s Artisan, showed up to keep us company and to gossip about big players in the industry. Don told me a bit about his previous work for Access Copyright, Canada’s copyright licensing agency, and about their fabulous current office in the Toronto Star building (Don tells me that there are some fabulous, cheap places to eat in the area). 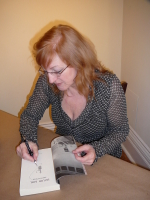 The highlight of the day was to be our own Sheree-Lee Olsen, one of the fair’s featured authors, reading from Sailor Girl at 1:00 PM, but before that happened we sold a number of books to some of Toronto’s great characters. Michael J. Mitchell stopped by and picked up George A. Walker’s recently released A Is for Alice; Mitchell, now a photographer, was once the maintenance manager at University of Toronto’s infamous Rochdale College. David French, the popular Canadian playwright, also visited the fair, and in his youth he cleaned toilets for Mitchell at Rochdale College too! Not surprisingly, A Is for Alice attracted a lot of different browsers: a few hours after Mitchell, a young woman of around high school age also bought the book, and later still a 9-year-old seriously considered the purchase.

In the end, she decided on the (free) bookmark.

In fact, the fair was full of people who, otherwise, I never would have expected to see in the same room together. Literary ladies, punks and goths, elderly couples and dads with kids, the Small Press Fair had ’em all. Tim and I talked about this on the late drive home: seeing so many people, young and old, creatively finding ways to read, write and promote their work, really drove home for me that the written word in Canada is blooming from the ground up. The media loves to say that ‘print media is dead,’ and while that may prove to be true for massive trade publishers, the happy crowd at the Gladstone yesterday proved to me that at the grassroots level, the book is still going strong.

Back to the fair: 1:00 rolled around and Sheree-Lee Olsen read a passage from Sailor Girl to a small and dedicated audience. Her reading teetered beguilingly between the very sad and very hilarious, and having now finished the book myself I can really recommend it. By then Michelle and George A. Walker had arrived to the show, and after Sheree-Lee Olsen’s reading I sat down with George and interviewed him about his upcoming wordless novel about 9/11, The Book of Hours. That interview will be appearing on this blog in the next week or two, as well as some things I’ve learned about how to make questions (and how not to make questions) when trying to get an author to talk about their work.

George A. Walker, Caleigh Minshall and Sheree-Lee Olsen at the Gladstone Hotel. December, 2009.

After lunch at the Drake (a hamburger and a pint of Creemore), Tim and I returned to the fair to find Kildare Dobbs moseying through the booths — and Kildare, his friend Ted Roberts and I quickly made our way to a second bar for a second interview, this time about Kildare’s upcoming long, satirical poem, Casanova in Venice. There is, apparently, more drinking involved in the publishing industry than I anticipated — but I’m not complaining. Maybe that’s just the way PQL authors operate.

Now there was only an hour left until closing time, and the crowd bustled. The value in these fairs isn’t found in how many books we sell, but in how many connections we make with other people and presses (this is especially important for an intern!). In this last hour of the fair I was lucky enough to briefly speak to John Degen, the Literature Officer at the Ontario Arts Council, and I had a hilarious exchange with Toronto poet Phlip Arima about the rarity of finding ‘just readers’ in Toronto’s publishing scene, Phlip’s new book of poetry and, strangely enough, my hairstyle (Phlip approves) 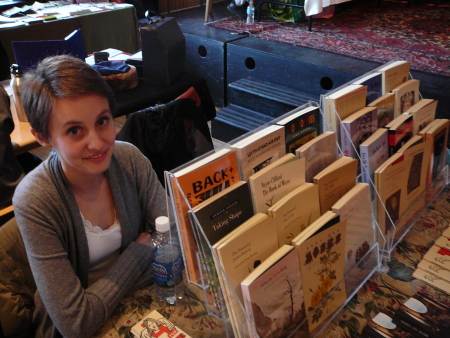 Even this long blog doesn’t begin to tell all of the day’s stories (a book fair full of authors is, not surprisingly, full of them). I haven’t told you about Kildare’s enemies in Montreal, or Sang Kim’s loving introduction of Sheree-Lee before her reading, or the beautiful, unique editions of
Wanderlust for sale that Megan Speers made and bound by hand. I also can’t tell you about my purchases at the fair, either: I did some Christmas shopping and I suspect the receivers will be reading this very blog!

Back to Kingston on Wednesday to finish my exams. You stay classy, Toronto.

Intern at the Porcupine's Quill.
View all posts by Caleigh →
This entry was posted in Letters from the Porcupette (the Intern's Blog) and tagged literary fair. Bookmark the permalink.

One Response to PQL at the Toronto Small Press Book Fair